The Functional Movement Screen assesses seven basic movement patterns to identify tightness and weakness in the body – so you can correct them before they cause major problems.

Robert Konishi has been running all his life. In a normal year, the 52-year-old Orange County, Calif., businessman would churn out two or three marathons. But when chronic injuries to his feet and Achilles’ tendons eventually caught up to him, he was forced to take time off to heal. Rest, ice and stretching, however, didn’t offer enough relief. What he needed, he eventually discovered, was to completely reassess how he moved.

This screening has recently gained popularity among trainers, chiropractors and physical therapists because it’s scored simply, gives a good baseline of abilities and, through rescreening, provides a consistent measure of progress.

“The movements were a bit awkward and difficult to do,” Konishi recalls. That’s by design — each isolates a different area of the body to prevent you from compensating and hiding weakness, says Lee Burton, PhD, ATC, CSCS, codeveloper of the Functional Movement Screen.

With this information, Konishi’s trainers were able to design an ultraspecialized workout that reenforced proper movement patterns, putting less stress on his feet and Achilles’ tendons. As a result, his workouts went from painful to supercharged. “After about four to six weeks, I had quicker recovery and less soreness in my hips after long workouts,” he says. “And I was able to touch my toes, which I’d never been able to do in my adult life.” This past June, Konishi completed his first marathon in more than two years and plans to do another in January.

It’s not magic — it’s simply good mechanics. The main purpose of the FMS is to seek out poor movement patterns so you can retrain the body to move in the most stable, efficient way possible.

As babies, we enter the world limber and symmetrical. But over time, we develop muscle imbalances and asymmetries, which can make us less efficient and more prone to injury. “Think of it this way: Even if a car has a flat tire, you can still drive it pretty fast,” says Kevin Elsey, performance specialist at Athletes’ Performance in Phoenix, Ariz. “But that tire uses up extra energy and will eventually distort the overall alignment of the car.”

The Functional Movement Screen is designed to ferret out those inefficiencies. If any of the seven movements is mechanically unsound, this indicates you have asymmetries or limitations somewhere.

What sets the FMS apart from other screenings — say for posture or flexibility — is its focus on dynamic movement. “Movement indicates how a body works,” explains Burton. “It lets us know how the brain is controlling the body and how the joints and muscles communicate.”

The Functional Movement Screen can help prevent injuries before they occur by identifying risk factors. “If you smoke a bunch of cigarettes, it doesn’t mean you’re for sure going to get cancer — but you are at a higher risk,” explains Burton. The same goes for poor movement patterns. If you do nothing to fix them, chances are greater that they’ll catch up to you.

Because no one moves perfectly, anyone can benefit from being screened. Then you can put the results of a Functional Movement Screen test to work, retraining your faulty movement patterns and keeping yourself running like a well-oiled machine.
Jenny Lui is a Chicago-based writer.

Professionals certified to perform the Functional Movement Screen are typically personal trainers, chiropractors and physical therapists who have completed special training. They can be found in sports clinics, physical therapy centers and some health clubs nationwide. To find an FMS-certified professional near you, go to www.functionalmovement.com.

The Functional Movement Screen (FMS) tests seven different movement patterns, scoring them on a scale from 0 to 3.

You’ll be asked to hold a dowel rod directly above your head to keep your hands and arms in place, and squat as low as you can with good form.

What the specialist is looking for: Ideally, the upper torso will be parallel to the shins, thighs will be below horizontal, and the knees and dowel will be aligned over the feet. In faulty movement patterns, the heels might be off the ground, the dowel might fall forward, the squat might be too high, or there’s twisting, leaning or other asymmetries.

You’ll be asked to step over a hurdle that’s a little below knee height. While holding the dowel across your shoulders, step over with one leg. Touch the heel down on the other side. Return to starting position.

What the specialist is looking for: Ability to balance; shifting in the level of the hips; how neutral the upper body remains.

3. In-Line Lunge: Used to screen ankle and knee stability, as well as abductor or adductor weakness. 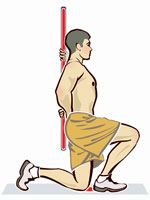 Once the administrator positions your feet, you’ll do a basic lunge while holding the dowel behind your back, one hand near the neck, one hand near the lower back. Feet are pointed straight forward and in line with each other, until your back knee hits the floor. Return to starting position.

What the specialist is looking for: The rear knee must touch the board just behind the forward foot, and the dowel must remain vertical. Also, the dowel must maintain contact with the head, upper back and butt during the entire move. Faulty movement patterns include the feet turning in or out, the torso tilting forward or backward, or an inability to balance.

4. Shoulder Mobility: Used to screen the shoulder’s range of motion, external and internal rotation, and posture.

You’ll be asked to make thumbs-in fists and put both hands behind your back at the same time — one hand goes over the shoulder while the other comes from the bottom and reaches up the back. The closer together your hands are to one another, the better. Repeat on other side.

What the specialist is looking for: Rounded shoulders, how close together your hands are, symmetry between sides. 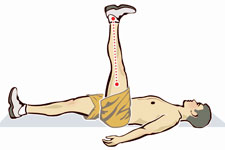 While lying on your back, arms at your sides, you’ll be asked to raise one leg as high as it can go without bending the knee, while leaving the other leg on the floor.

What the specialist is looking for: The angle of your raised leg, if it’s bent, the alignment of your ankle in relation to the mid-thigh.

You’ll be asked to perform a pushup with your hands aligned with the top of the forehead for men and the chin for women.

What the specialist is looking for: The movement should be a simultaneous, full-body movement; watch for hyperextension of the spine, or saggy hips.

You’ll be asked to get down on all fours. Raise your right arm and leg until they are parallel to the floor, then touch your right elbow to your right knee, extend the leg and arm again and return under control to the start position. Repeat with the left side.

What the specialist is looking for: Elbow knee alignment, trunk rotation, and differences between right and left sides.